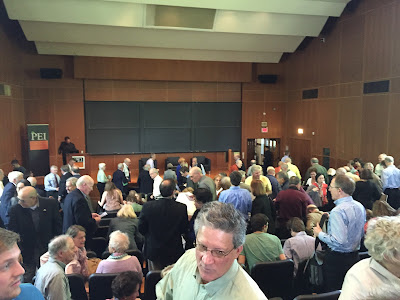 A pretty good crowd showed up at Princeton University for James Baker's talk entitled "A Conservative Approach to Climate Change". Years ago, you'd be lucky to get 10 or 20 in an audience for anything having to do with climate.

At 87, Baker looks back on many successes for those he served. He lent competence to the Reagan and Bush 1 administrations, and outmaneuvered the Gore team in the 2000 post-election fight for Florida's electoral votes. Reagan cut funding for climate research, and the Baker-assisted Republican victory in 2000 tragically stalled progress on combatting climate change for 8 years.

Having used his considerable diplomatic and administrative skills in the service of those who sabotaged solutions to the problem, Baker and some of his esteemed Republican colleagues, such as George Schultz, are offering what he calls a "conservative" solution for climate change. He is now, in effect, going up against the monster of denial and political expedience his former employers--Reagan and the Bushes--did so much to create. It's hard to see how even the extraordinary charm and tactical capacity of a James Baker could crack the nut of Republican resistance--a resistance that has served Republicans so well by letting voters off the hook for dealing with a massive problem.

Baker deserves credit for backing a worthy goal--a carbon tax. Essentially, a tax is levied on carbon-based fuels used to create and transport products, whose cost in the marketplace is then affected. The tax would be predictable, starting low and gradually rising. The carbon "content" of imports would be taxed as well. Business would appreciate the predictability, and be motivated by cost incentive to shift towards renewable energy. The tax revenue would be returned to all citizens of the U.S. as a check in the mail. A $40/ton of carbon tax would make that check $2000/year, in Baker's estimation. Regulations--many of which, it should be said, were created because Republicans have resisted solutions like a carbon tax--would be eased as the carbon tax took effect.

Though he claims that he and other conservatives came up with it, the approach sounds remarkably similar to what the Citizens Climate Lobby, a bipartisan group that's been around since 2007, has been working towards. George Schultz is very involved with CCL, and Baker claims to have started speaking about climate change as a problem back in 2004, but it's unclear to what extent they contributed to the development of the approach. There was no mention of CCL in his talk or during Q and A. (Note: I've since been told that Baker's approach gives more emphasis to rolling back regulations, and starts with a higher tax/ton that the CCL proposal.)

Baker doesn't admit that carbon emissions are causing the problem, but instead says the risks are too large to ignore. He declares hyper-partisanship to be a problem, but doesn't admit that much of the partisanship is artificially created by his ideological brethren who deny the overwhelming scientific evidence that climate change poses a huge risk to our future. Truth is an important source of unity. Denying it creates polarization where none need exist. We do not have, therefore, a "both sides are to blame" equivalence when it comes to political gridlock on climate change.

There seems to be a tacit understanding that Baker needs to label the proposal conservative in approach and origin, in order to avoid being labeled an "Other" by the Republicans he seeks to persuade. Therein lies the greatest sadness, that his political party has embraced the political expedience of climate denial, purging itself of any who dare acknowledge reality, so that Baker must still pretend there is scientific uncertainty, as in "carbon emissions may be causing our problem."

At least Baker dares to use words like "tax" and "liberal" in positive contexts, as in his support for a "liberal global order". These are small victories, coming long after the brutal effort, by Newt Gingrich and his progeny, to burden those words with enough negative connotation that no one dare use them, and to demonize liberals to the point that anything they say is rejected out of hand. Thus is political dialogue rendered dysfunctional, and problems like climate change fester for thirty years.

At the beginning of the talk, Baker joked about a friend of similarly advanced age who told Baker that they were living "in the fourth quarter". No, Baker replied, "we're in overtime." He's happy to be alive, still active, still relevant. If he contributes to an unlikely last minute victory for climate action, we can cheer him on, while being mindful that he spent most of his life serving those who have set the nation up for defeat.
Posted by Steve Hiltner