George Will Criticizes Those Who Don't Praise 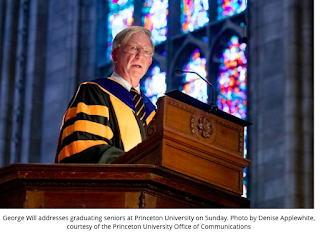 As part of the 2019 graduation ceremonies, political columnist George Will gave one of the more curious speeches ever to bounce off the ornate walls of the Princeton University Chapel. Enrobed in orange and black, he chose to praise praise. "Intelligent praising is a talent," he said, "It is learned. Like all virtues, it is habitual. It is a habit. And it is a virtue we need more of, right now." Speaking as a 1968 graduate of Princeton University, Will told the graduating seniors, many accompanied by their parents, that he hoped they had "learned to praise." He said that many Americans "seem to think that expressing admiration for someone or something is evidence of deficient critical faculties." Instead, he posited that the habit of giving praise is evidence that one is sufficiently secure to celebrate others "without feeling oneself diminished."


Then, rather than give examples of praise, he proceeded to unleash a flurry of criticism. He criticized "the infantilization of America," a nation he described as "awash in expressions of contempt and condescension." He criticized what he called the "anti-social media", and its "snarky expressions of disdain". He criticized our "age of rage," and those Americans for whom "disparagement is the default setting."

He criticized the "habitual disparagers," for whom "maturity means a relentlessly-exercised capacity for contempt." He criticized an "unpleasant surplus" of anger, an eagerness "to be angry about something — anything." All of this Mr. Will believes to be evidence of a "culture of contempt."

How could a speech in praise of praise slip so frequently into criticism? Praise is a wonderful thing, to give and to receive, but it is not what got George Will to that pulpit in the Princeton Chapel. He reached that level of distinction through a career dedicated to finding fault in others, whether it was every other week in Time magazine, or twice weekly in the Washington Post for some 40 years.

Through the decades, those columns have oozed with contempt. The following example is indicative, as he mocks leaders concerned about climate change.

“Consider Barack Obama’s renewed anxiety about global warming, increasingly called “climate change” during the approximately 15 years warming has become annoyingly difficult to detect. Secretary of State John Kerry, our knight of the mournful countenance, was especially apocalyptic recently when warning that climate change is a “weapon of mass destruction.” Like Iraq’s?”

This is not the first time George Will has returned to his alma mater to preach a gospel distant from his own conduct. Back in 2015, he shared the stage at McCosh 50 with faculty member Robert George to tell the audience that we should, in John Stuart Mills' words, "be willing to entertain reasons why we might be wrong." That capacity to reflect and question one's own beliefs is vanishingly rare in George Will's writings, most strikingly in his denial of human caused climate change. 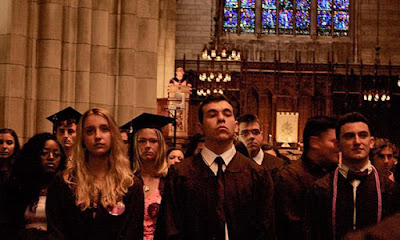 Interestingly, Mr. Will's newfound religion of praise coincided with an occasion at which he likely knew he would be criticized by many in the audience--students who stood with their backs turned to him throughout his speech, to protest a 2014 column in which he criticized those concerned about rape at universities. Given that context, Will's declaration that "there are deleterious political consequences from the weakening of the adult culture of confident, measured and generous judgments about people and events" can be seen as a dig at the protesters in the audience. After a long career dedicated to criticizing others, Will cast as immature those who criticize him.

A local news source, Planet Princeton, published an account of the speech that didn't mention the 100+ demonstrators in the chapel. If the comment section was indicative, many readers, unaware of the context of the demonstrators and George Will's history of serial contempt, took his speech to be thoughtful and positive, rather than a verbal spanking of Will's critics that was drenched in irony and hypocrisy. It was a chilling reminder of how easy it is, for instance, for political candidates to sway voters who lack the time or inclination to look beneath the surface of the words.

There is a good speech that could be given about the paucity of praise and our preoccupation with people worthy of contempt. It would point out that government is seldom praised when it works well, which plays into the hands of those seeking to undermine it. The speech would note that headlines and our conversations tend to gravitate to bad actors, and acknowledge how the incompetence shown by leaders actually has a payoff for us as individuals. Misdeeds and malaprops provide fodder for late night comedy that entertains us while making us as individuals feel more competent by comparison, even as poor leadership endangers our collective survival. The speech would point out that, if people focused some of their skepticism on their own views rather than always looking outward for fault, then someone like George Will would pause before showing such overt hypocrisy, and would find suspect the cherry-picked evidence of the climate deniers. The rise of conservatism that George Will worked so hard to promote in the 1980s and 90s has been built on an increasing contempt for government, for liberals, nature, truth, democracy, the downtrodden. Will's call to "neuter" the presidency of Obama was part of a larger denial that Democrats have any right to govern.
Praise is certainly praiseworthy, but as George Will's career and the Republican ascendency has shown, people and ideologies most consistently rise by tearing others down, avoiding self-scrutiny, and projecting their own failings onto others.
Posted by Steve Hiltner No comments: