Saving the historic house and farmstead of a famous mathematician, visionary and close colleague of Einstein's. More information at VeblenHouse.org.

Oswald Veblen was an internationally prominent mathematician who joined the Princeton University faculty in 1905 and played a central role in building the mathematics department. Veblen was a visionary instrumental in establishing the Institute for Advanced Studies in Princeton, and in bringing Einstein and many other top scholars to town. He largely designed the original Fine Hall, an innovative academic building where Einstein first had an office.

During the Nazi rise, he found academic positions for German scientists in the States. A marksman from his early days in the midwest, Veblen also took the lead in improving ballistics calculations during the world wars.  During World War II, this work led to his overseeing development of the pioneering ENIAC computer, and he did much to encourage subsequent early computer development by John von Neumann at the Institute.

A "woodchopping" professor who loved the woods, Veblen and his wife Elizabeth later donated nearly 100 acres of farmstead and forest for preservation in eastern Princeton--what is now known as Herrontown Woods. More information about his contributions to town, university, Institute, nation and world can be found at this link. 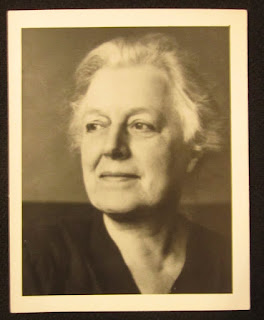 Elizabeth, who grew up in Yorkshire, England, instituted the tradition of afternoon tea in the mathematics department, and then later at the Institute, where it continues to be a daily ritual. A passage in A Beautiful Mind, describing post WW2 Princeton, suggests she was a central figure in Princeton social circles: "May Veblen, the wife of a wealthy Princeton mathematician, Oswald Veblen, could still identify by name every single family, white and black, well-to-do and of modest means, in every single house in town."

Her brother was Owen Richardson, who won the Nobel Prize for his work in physics.

Oswald Veblen was the nephew of Thorstein Veblen, the famous economist and sociologist who wrote The Theory of the Leisure Class and coined the phrase "conspicuous consumption."

VEBLEN HOUSE: Though the house in Minnesota where Thorstein Veblen and Oswald's father were born has been restored, the house and cottage in Princeton, NJ that Oswald and Elizabeth left to the public trust have been boarded up since 2000 and faces eventual demolition. The Veblens donated the house and 95 acres to the county, to be used for nature appreciation. Efforts to save the 1920s pre-fab house are documented at VeblenHouse.org.