As mental nourishment for the alumni who gather each spring on the beautiful Princeton University campus for the annual reunion, morning panels are offered on topics of the time. Non-alumni, if not clearly welcomed, are not unwelcome, so I took the opportunity to attend a panel discussion entitled "Perspectives on Modern Conservatism and Libertarianism", moderated by Robert George.

Of the two libertarians on the panel, the first to speak was someone named John Stossel, currently with Fox News, and surely one of the most youthful looking members of the class of '69. He said he graduated from Princeton with a liberal perspective like most others, but that he began to see flaws in liberalism and gravitated towards a libertarian perspective. He is, by his own account, "a lousy conservative", because he was against the Iraq War, believes in the right to die, drug legalization, even prostitution--anything that's peaceful and doesn't harm others. He said the welfare state has obviously failed, and though he doesn't think that Walter Cronkite really was telling us "the way it is", he believes that liberals, conservatives and moderates are now much too isolated and should be talking to each other more. 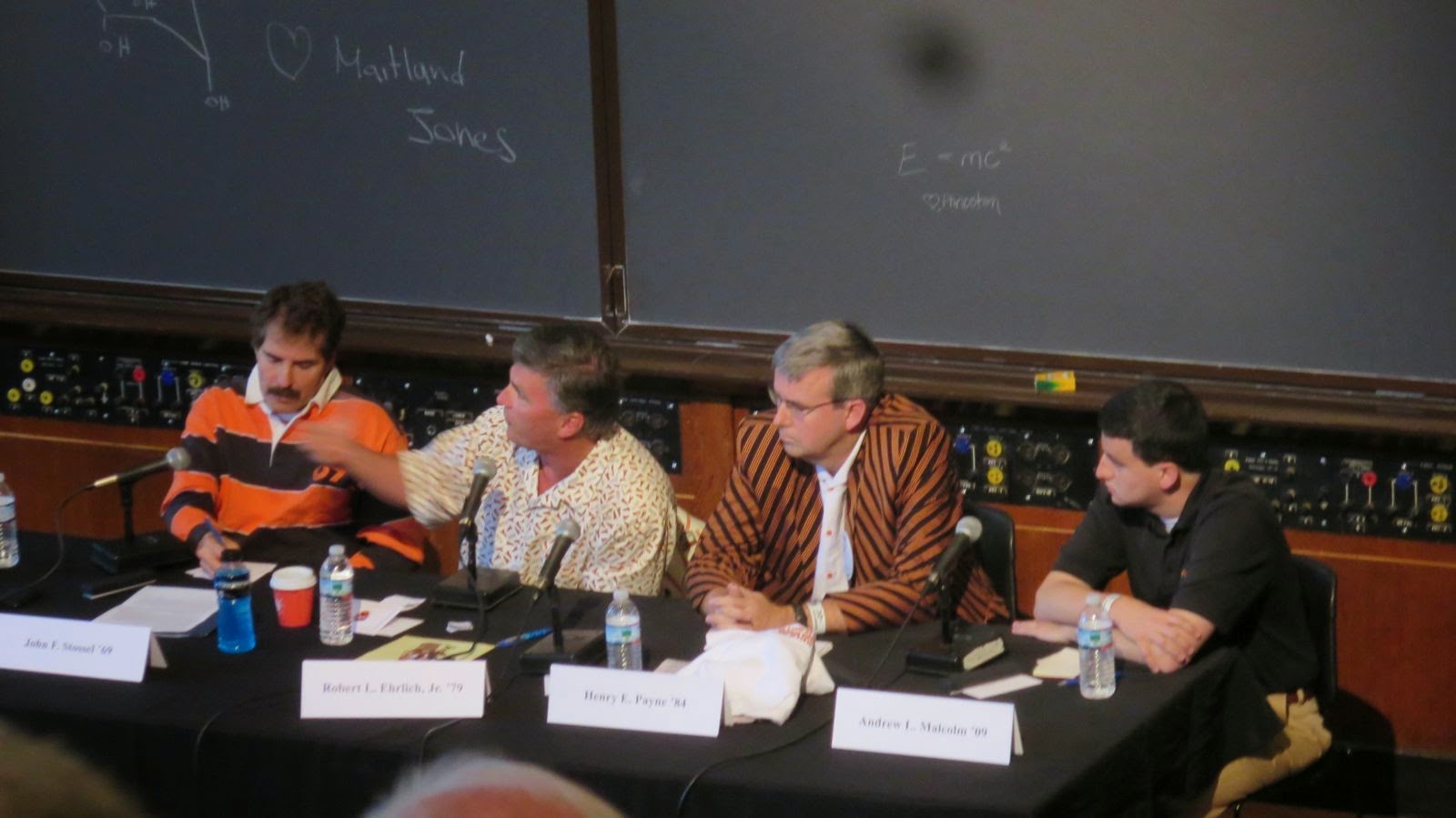 What followed from other panelists were recurrent themes associated with modern conservatism: government regulation and debt are bad, privatization and charter schools good. Liberals were presented as wanting to impose a culture of dependency, in which government takes care of you from cradle to grave. This characterization sounded over the top. Panelist Bob Ehrlich, former governor of Maryland, found particular catharsis in turning liberals into straw men who could easily be knocked over. If I give my daughter money to buy lunch at the mall, or help pay her college tuition, am I imposing a culture of dependency? Or is it only when government doles out money, usually to people who don't have prosperous parents, that dependency is cultivated?


Robert George, director of Princeton's James Madison center and a strong promoter of the conservative perspective on campus, made some interesting interjections. Conservatives, he said, view freedom as an absence of outside interference, while liberals view freedom as something given by government, through programs that help people live a good life. He also suggested that conservatives more closely reflect Hamiltonian liberalism than liberals do. By coincidence, I had just been thinking that liberals adhere more to the definition of conservative-the-adjective than the current sort of conservative who promotes destabilization by shutting down the government and denying climate change.

If called on during Q and A, I would have asked what conservatives will say when they have to admit that climate change is real, largely human-caused, and that the failure to act in recent decades is risking massive damage to the planet and human economies. "Oops," perhaps, in the tradition of Texas governor Rick Perry?

Afterwards, noticing Mr. Stossel standing alone, I asked him. Yes, he acknowledged, "Oops" is a possibility. But he says there's too much doubt to act, and besides, action is unlikely to be successful. I responded that he was denying both the problem and the solution. He said that maybe it won't be so bad, and besides, there's always a chance that someone will come up with a way to fix the problem at the last moment. He said we will eventually run out of fossil fuels, at which point people will have to come up with some different source of energy.

There were a number of things I pointed out to him, and another alumnus who joined our conversation. One was that we are collectively creating the problem, each one of us contributing, and it makes no sense to allow people to collectively create a problem while denying all possibility that we can work together to solve it. The idea that we have the freedom to consume all of this wonderful energy, then leave future generations to deal with the negative consequences, seems irresponsible and unfair. And how can a free market be free if it doesn't factor in the future cost of consuming a commodity like carbon-based fuels?

Now, Mr. Stossel may have thought he was being optimistic. After all, he thinks that climate change, if it's real, won't be so bad. And he holds out the possibility that someone will solve the problem at the last moment. But this is the optimism of a gambler, a form of wishful thinking. It's like a coach telling team America to wait until the game is all but lost, then throw a hail mary.

I didn't say all of this at the time, but did point out the pessimism embedded in Mr. Stossel's denialism. He appeared less than pleased, drifted off into another conversation, and I continued talking to the other alum, who characterized Germans as having foolishly cluttered up their towns with unattractive solar panels and wind generators while turning their backs on nuclear energy. France, I noted, had invested heavily in nuclear. And at that point, when I didn't respond negatively to nuclear energy, we started to find some things in common. I would say the appearance of solar panels seems a small price to pay for clean energy, but we agreed that the government's ethanol requirement is a destructive boondoggle, harmful to the environment and, according to him, harmful even to car engines, and that the only reason ethanol production is subsidized is because the first presidential campaign primary is in Iowa. He gleefully said that fossil fuel had saved the whales, because the discovery of oil in Pennsylvania provided an alternative to whale oil. Interesting, though the next question is who will save us from the consequences of fossil fuels? And the whales could easily be hunted to extinction now, by deadly fishing fleets made possible by fossil fuels. Only regulations and international law stand in the way.

I suggested that the conservative panelists were exaggerating the intensity of government intrusion, that the back and forth about government and markets sounds like past debates on nature vs. nurture. Both play a role and have their place. Too little regulation is as harmful as too much.

Afterwards, I had to agree with Mr. Stossel on one thing, that liberals, conservatives and moderates are too isolated and should be talking to each other more. One example of this is when Stossel had NASA climate scientist Gavin Schmidt on his program. Schmidt's performance is a tour de force of optimistic realism. Stossel suggests we can't know how much climate is changing or what's causing it. Gavin details how it's changing and how various natural factors that have caused climate to change in the past have been considered and ruled out, leaving human influence as the primary cause. Stossel then goes through a rapid sequence of one pessimistic view after another: We can't do anything about it, and if we can it won't do any good anyway, and if action would do some good, then poor people will suffer. To each of these negative propositions, Gavin offers a positive solution. After Gavin left the stage, the rest of Stossel's program on climate change was a celebration of the good that fossil fuels and carbon dioxide have done. Burning fossil fuels means fewer trees being cut down for wood. Machines have taken the place of slaves. Carbon dioxide helps plants grow. All of this is true, but just because a substance is beneficial in one way does not mean it isn't harmful in another. Though water is essential to my life, that doesn't mean I want it flooding my basement. Nor does our need for warmth make an argument for parking our cars in the summer sun with the windows rolled up. Whether something is good or bad depends on how much and where.

At some point, John Stossel will have no alternative but to say "oops". When he does, he'll gain in optimism and realism what he loses in identity, ideological certainty, and wishful thinking. Meanwhile, precious time is being lost.