Cheering for the World 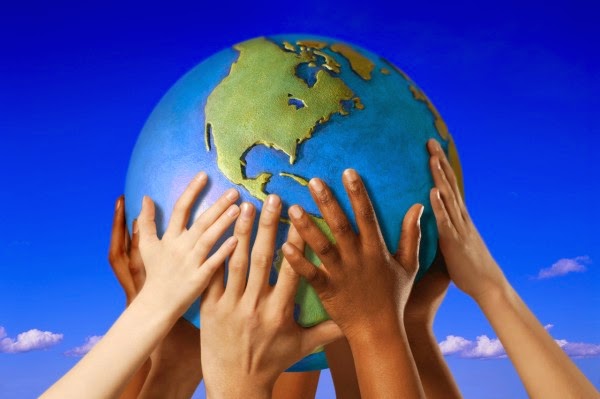 A question inspired by the World Cup: What if the team was all of us, together, and the trophy was a magnificent, life-giving planet orbiting through space?

The World Cup final was, for me, nerve-racking to watch. It was of more than idle curiosity, as my wife is from Argentina, thoroughly trumping my mostly German ancestry. In its semifinal against the Netherlands, the Argentine team was victorious but took a physical beating. Heads collided; bodies took jarring blows; legs were pushed to their limits. The hard road to the finals entails attritions large and small. Players reach the most defining game in their careers depleted, battered and bruised. The Germans, so ruthlessly efficient against Brazil, offered the Argentines the game with some early and glaring mistakes. But perhaps the Argentines lacked a killer instinct, and let the opportunities vanish as quickly as they were presented.

What a fickle and capricious game is soccer. First it strips players of the appendage that most defines humanity. With both hands figuratively tied behind their backs, they must channel a nation's aspirations unnaturally through foot and head. The result is a mix of grace and grit, tap dancing on turf alternating with bursts of speed. Its emphasis on endurance and nimbleness rather than brute strength also takes us back to our distant beginnings, as lean hunters who had to either outsmart our prey or chase them until they collapsed from heat exhaustion. There are echoes of the hunt, too, in the diminished role of the coach. No time-outs, only three substitutions, few set plays. The players have a basic plan and individual positions, but the rest is patience, improvisation and spontaneity.

Then there's the combination of nonstop effort and fleeting opportunity. Players push against a wall of impregnable defense for an hour, then through chance, clever maneuvering, or sudden defensive lapse, an instant of opportunity opens up. The World Cup, so elusive a prize, is suddenly there for the taking, the door wide open. In that moment, everything must go right, the ball struck at just the right angle, or the door slams shut, the opportunity gone, very possibly not to come again. This, too, is reminiscent of the hunt--the long prelude of stealth and savvy that leads to the moment upon which all depends. How hard it is to be in the moment when the moment arrives. As it happened, experienced players on both teams missed their chances, leaving it to a young German off the bench to be in just the right place, and make just the right kick in that one moment he was given.

Americans criticize soccer for not having enough scoring. And yet, when Germany routed Brazil, scoring easily and often, the game was cheapened. Soccer thrives on slowly building tension. The harder a goal is to score, the more it is prized. Because one goal can make the difference, and danger or opportunity can evolve very quickly, the game could be decided at any moment.

In basketball, another game that combines grit and grace, players get immediate gratification. Make a good shot, you get a point or two or three. But soccer at the World Cup level is full of excellence--perfect passes, deft touches, clever deceptions--all done with no promise of anything to show for it. In that way, it more accurately reflects our dreams and values, as we expend effort and seek to do the right thing with no certainty of reward. There is no quid pro quo in soccer, only a striving, and a hope that it will all lead to something worthwhile.
Soccer, too, with its uninterruptible stream of play, defies commercialism to interject itself into the fray and compete for the fans' attention and affections. For 45 long minutes each half, no softdrink or car brand can intrude on that sacred space between fan and national team and say "Buy me!"

I was surprised when my wife, who is working this summer in Argentina, called after the game and said that the streets of Buenos Aires are filled with celebration and national pride. Not the wild joyous frenzy of victory, but a pride in and celebration of their team and the extraordinary effort the players put forward. Though goals dominate the replays, the brilliance in this World Cup was in defensive efforts, particularly those of Argentina, and also of the U.S. team as its goalie and defensemen repulsed wave after wave of attacks in its loss to Belgium. Our national anthem, after all, is primarily about surviving relentless attack, not delivering the decisive blow.

And as the players gave their all for their country, fans cheered as if their cheers and hopes and passions might make a difference. That is what was so refreshing in this World Cup, the feeling of unity, the coming together of a nation to support its team, each fan invested in a shared outcome that will reflect positively upon the nation. In contrast to the intransigent polarization of politics, the pettiness and relentless effort to diminish any shared national achievement, it is deeply moving to see countries coming together for their respective teams, cheering together, wanting to be part of something larger than themselves. How extraordinary it would be if Americans defined themselves less by difference and more by shared interest, and sought a common goal, something whose lasting meaning and consequence would not be symbolic but have a substantive impact on our collective fate as a nation and a planet.

We've seen the dangers of national unity and collective endeavor, in the environmental atrocities of China under Mao Zedong, or the German imperialism and genocide in the 30s and 40s. But we desperately need to act collectively in an intentional way, to counteract the massive and unintentional negative impact we are having, collectively, through the biproducts of our day to day lifestyles. That unity will depend on everyone accepting reality, as soccer teams do. Unlike in politics, where denial of scientific findings is now entrenched, one soccer team doesn't unilaterally opt out if it doesn't like the facts. Regulation in soccer--the boundary lines and rules of the game--is calibrated not to weaken the game but to help channel the energy of the players in constructive directions.

It would have been hard to imagine, back when I was growing up, that the biggest of World Cups is being played every day. We have, it turns out, tremendous collective power to transform the planet. We really are, each day, playing to decide the fate of the world, and each one of us is a part of that power. The more of us there are, seeking understandably to live the good life, the more collective power we wield. Many people seek to deny responsibility for that power and its consequences. Some pretend it's negative impact is a hoax, or hope we'll get lucky, or are content to leave our fate in God's hands. In soccer, there is room for luck and for God, and yet the players do everything they can to influence the outcome, knowing the folly of assuming everything will turn out all right.

So imagine a world where, despite our differences, we are all rooting for the same team, and that team is us, with the planet's web of life and elemental powers as our allies. And rather than just pretending we each can have an influence on the outcome, we actually do. And imagine all hands on deck, not to tear each other down, but to raise the most precious trophy of all, spinning gloriously in space, and whose miraculous gifts to life are in our hands.