Skepticism and Self: Science's Role in Sustaining Democracry

This is a repost from another blog of mine.


"It's a readiness to be wrong that motivates the study needed to be right."
- Yures Trooley 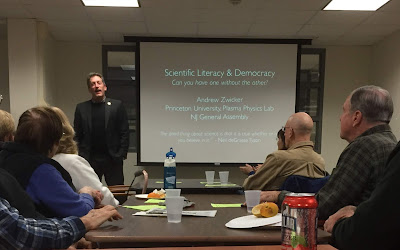 Andrew Zwicker, one of Princeton's two representatives in the state house, spoke this week to a full room at Mercer County Community College. It was part of a monthly series of talks hosted by the NJ Sierra Club. Assemblyman Zwicker is one of our few, perhaps the only, representative in government who is trained as a scientist. I attended not only because Zwicker is a gifted speaker, but also because of the subject. 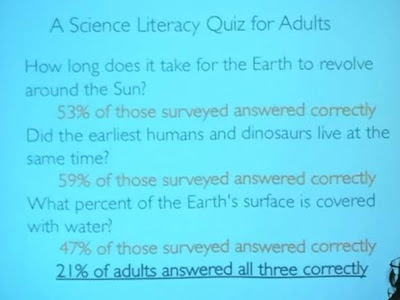 The title of the talk, "Scientific Literacy and Democracy," struck a chord with me particularly because the plight of nature has increasingly found a parallel in growing threats to democracy. Both are at risk in a time when truth is being attacked, denied, ignored, downgraded, and generally dismissed. There is the national reality of a leader who cannot see beyond his own skin, and a broad-based, corrosive and paralyzing polarization that thrives on a dismissive attitude towards evidence.

Andrew Zwicker is a rare breed, a scientist who is also comfortable in front of an audience, and he has taken that extra step of bringing his scientific abilities into the political realm. An evidence-based perspective could be a unifying influence if it caught on among his colleagues at the statehouse.

Having a couple science degrees, I have found myself increasingly aware that my mind works differently from many who lack science training. Most significantly, that training can help direct skepticism not only outward but inward as well, at one's own views.

Most of the world's polarization and radicalism would disappear if people directed as much skepticism inward as outward. Science, and its pursuit of truth, is like a lifeline being extended to a world fractured by unfounded opinion. The political polarization we suffer through is artificially created by people who refuse to adjust their views in the face of evidence.

My views are built on varying degrees of knowledge, experience, and observation. Some of those views are better supported than others, and all are subject to revision in the face of new evidence. Scientific training is liberating, in that it allows facts to exist independent of what we might wish were true. Unentangled from our emotions and sense of self, facts need not be feared or clung to, but can be built into an evidence-based view of the world.

My older daughter went through a phase in which she'd periodically declare, with a mixture of surprise and pride, "I changed my mind!" There's pleasure in that flexibility, that openness to new evidence, and my sense is that many people have lost that openness. Recently I was on an advisory committee, developing a list of proposals for action on climate change. The subject had everything to do with science, but only a few of us appointed to the committee had scientific training. A couple of us with a scientific background made suggestions, with some supporting evidence, expecting that if others disagreed, they would provide counter evidence. Being open to new evidence, I might have changed my mind if someone had a more convincing argument. Instead, people simply didn't respond, and continued to stick to their own views without feeling compelled to defend them. They'd mention something they'd read in a book that they liked the sound of, and it would turn out that even the book, though about science, was written by someone who lacked training in science.

During Q and A with Assemblyman Zwicker, I mentioned this curious phenomenon, that science-related advisory committees and science writing can be dominated by people lacking science training. A science editor for the NY Times once wrote a deeply flawed oped denying the threat of invasive species. Turned out he was a Princeton grad with a PhD in english. There are no doubt science writers who know much more than I do about many aspects of science, and yet there's something about science training that cultivates a healthy two-way skepticism, inward as well as outward. It's a readiness to be wrong that motivates the study needed to be right. 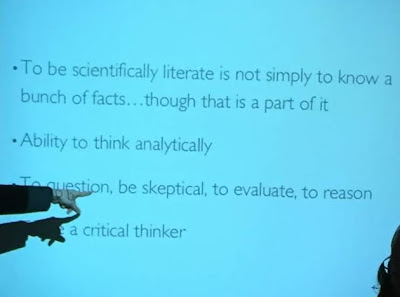 After the Q and A, a woman came up to me and said that data is the issue. Most people don't know what to do with data. Maybe she was referring to an analytical ability that develops over time. Science presents you with data, and you have to figure out what the data is suggesting, if anything, and whether it's strong enough to be conclusive. The process requires a great deal of patience, but it also requires an acceptance that there is a reality outside of oneself that really doesn't care about us and our emotional needs at all.

It's possible to experience that reality out in nature, when one gets far from the ever-expanding footprint of lights and noise, far enough that the only human presence is within one's own skin. For me, it's happened a few times, most strikingly while on an ocean shore late at night. The ocean waves crashed against the sand with a symphony of sound, and the stars shone bright in unfathomable numbers overhead. It was glorious, and yet I was aware that this rich nature cared not a wit about me. The same might be said of truth. 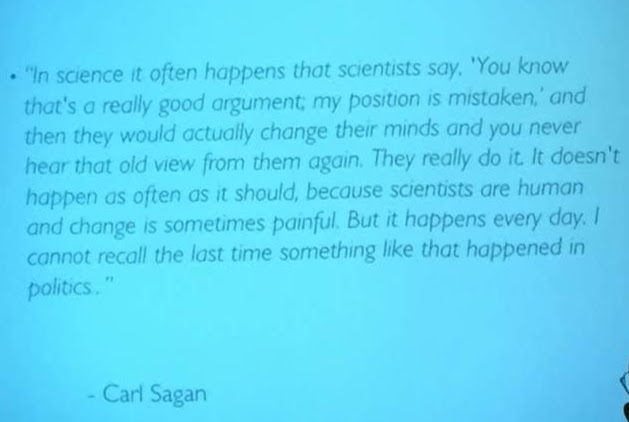