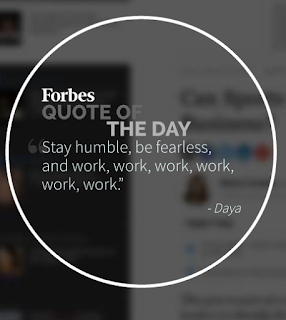 There's an irony in that quote, "Stay humble", which popped up on the screen halfway through a Forbes oped entitled "The Irony Of President Obama's Oil Legacy". The oped's point is that presidents can be unfairly given credit for what was not their doing. But the article's language itself is permeated with a false claim, that people "produce" oil and natural gas. The word "production" is used 22 times.

Go to talks on political science or economics and you will hear no mention that societies and economies are dependent upon a planet. That environment and climate went essentially unmentioned in the recent presidential campaign was not a fluke, but rather indicative of an anthropocentric bias and a long-broken relationship between people and the planet that sustains us.

To begin the mending, and a return to reality, economists and journalists need to stop deceiving people about how we get oil and gas. We don't "produce" it, any more than a baby "produces" milk from its mother's breasts. If the baby, a very precocious baby, rather than drinking the breast milk chose to bottle it and sell it at the local grocery store as a product, would anyone believe that the baby had "produced" the milk? No, the baby is milking its mother for all she's worth. People would question the baby's ethics and wonder how the mother was holding up under all the pressure to produce.

We don't produce oil and gas, we extract it. "Extraction" makes clear that earth is the producer. Although we can refine and repackage what we extract, the ultimate source of wealth is from the earth itself. "Oil production" also creates the illusion that we can simply keep making the stuff. "Oil extraction" makes clear that, once something is extracted from the earth and consumed, it's gone.

These distinctions are a first step in weaning the economy, our language and ourselves of the narcissistic tendency to falsely take credit and claim we exist outside of nature.