From Ronald to Donald--Comparing Inaugural Addresses 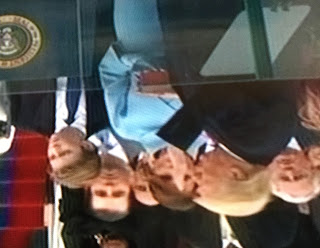 For many of us, the 2016 election demonstrated that we now live in an upside down political world, where facts don't matter, bad behavior is rewarded, existential threats can be ignored, nonsense sways more than sense, and cowardice and denial are viewed as mental toughness. Cabinet appointees appear intent on dismantling the departments they are entrusted to lead. Righting the ship means looking back at the ideological currents that swept us over and have now left the nation dead in the water and drifting backward.

Where we are now has a lot to do with where we started heading 36 years ago, so it's fitting to compare the inaugural addresses from when the presidency took these sharp ideological pivots, in 1981 with Reagan and in 2016 with Trump. They show many similarities as well as some sharp contrasts. A deeper look at Reagan's address also shows him, surprisingly, to be praising those who pay taxes, implying that government isn't always the problem, and sounding like Al Gore on climate change. I will use the Ronald/Donald motif, rather than their last names, because of their similar sound.

Donald John Trump rode to victory on the story of America that Ronald Wilson Reagan embedded in the national consciousness through endless repetition. Neither Bill Clinton nor Barack Obama--for all their success at leaving the country better off than they found it--harnessed that power of repetition, and so they left the storyline Ronald forged largely intact. To a considerable extent, the country continues to live inside Ronald's brain, where fiction was mightier than fact, science was suspect, and big government was the enemy. With some notable and seldom mentioned caveats, that story gets told in Ronald's first inaugural address, from which Donald appears to have borrowed heavily. A comparison of the two reflects both the continuity and the ongoing devolution at work in the Republican Party.

PARALLELS BETWEEN RONALD AND DONALD

The Niceties
Both mention the orderly transfer of power, and complement the outgoing Democrats on how gracious they are at ceding power.

Sense of Urgency
Ronald's "We are going to begin to act, beginning today." becomes Donald's "That all changes starting right here and right now" and "Now arrives the hour of action."

Populist Appeal to the Working Class
Reagan's "a special interest group that has been too long neglected ... made up of men and women who raise our food, patrol our streets, man our mines and factories ..." becomes Trump's "the forgotten men and women of our country".

Purging A Washington Elite
The deep satisfaction of catharsis drove many to vote for Ronald and Donald, whose populist rhetoric seduced even those sure to suffer from the resultant economic policies favoring the wealthy. Voters can be riled up to kick politicians out of Washington no matter how unpromising the replacements. Ronald's "we've been tempted to believe ...  that government by an elite group is superior to government for, by, and of the people" become's Donald's "a small group in our nation's capital has reaped the rewards of government while the people have borne the cost."

Dream Big
Ronald's "we're too great a nation to limit ourselves to small dreams" and "We have every right to dream heroic dreams" becomes Donald's "And we will bring back our dreams." and "we must think big and dream even bigger." Unfortunately, both have equated dreaming big with the extraction and burning of more fossil fuels, which leads inevitably to a big nightmare of radicalized weather, climate refugees, and loss of America's coasts to rising oceans.

International Commitments:
Reagan's "we will strengthen our historic ties" becomes Donald's "We will reinforce old alliances and form new ones"

Amped Up Negativity
It's telling, in terms of the respective depth of their intellects, that Donald's inaugural address was about half as long and twice as negative as Ronald's. Even Trump's attempts at positive statements come off as veiled criticism. Though it may sound positive to say that we will "rebuild our country and restore its promise", what is really being said is that our country currently lies in shambles, stripped of promise. To say that we "will make America strong again" is to imply that it is not strong now. Ronald claimed that "we will be seen as having greater strength throughout the world", and spoke of "an era of national renewal", which sounds like America needs a renovation, rather than a last-minute rescue from what Donald calls "American carnage".

Past Leaders and Future People Disappear
Unlike Ronald, who mentions Winston Churchill, some founding fathers and a war veteran, and speaks of insuring "happiness and liberty for ourselves, our children, and our children's children", Donald makes no mention of past or future generations. For Donald, there's no need or inclination to link his administration to past or future. He sees himself as singular, an improvisor immersed in the moment.

Speed of Change
Ronald was much more modest about what he could achieve. He was promising persistence above all. His "progress may be slow, measured in inches and feet, not miles, but we will progress"
becomes Donald's "this American carnage stops right here and stops right now", and "terrorism, which we will eradicate from the face of the Earth."

God's Role Changes
There's been a slow shift in people's view of what God can do. In keeping with his era, Ronald adopted the view that God helps those who help themselves, e.g. "with God's help we can and will resolve the problems which now confront us." The tendency among the religious more recently, particularly when confronting big challenges like climate change, is to believe God will do all the work for us. Interestingly, that was Ronald's scathing critique of welfare programs, that recipients were using government aid to avoid putting forth effort. Now, people are using God's supposed omniscience as an excuse to be passive, as in Donald's more absolutist "we will be protected by God."


Compassion
It's been said that Ronald created a lasting deception by putting a kind face on heartless policies. That divide between image and reality, between a candidate who connects with the people but implements policies favoring the privileged, has only deepened with time. Ronald at least made reference to compassion: "We shall reflect the compassion that is so much a part of your makeup. How can we ... not love our countrymen; and loving them, reach out a hand when they fall, heal them when they're sick ..." Donald promises only that "you will never be ignored again." There are a lot of voters out there who like those words, and the emphatic way they are said, whether they mean anything or not.


SOME SURPRISES IN REAGAN'S 1981 INAUGURAL ADDRESS

The Heroes Who Pay Taxes
Like Ronald's language about compassion, there was a time when Republicans were still allowed to say something positive about taxes. Though Reagan spread the illusion that tax cuts could magically increase government revenue, his inaugural speech contained the following: Among the nation's heroes are "individuals and families whose taxes support the government".


A Famous Quote Infamously Misquoted
Ronald's famous quote about government is invariably misquoted. It begins with an important qualification: "In this present crisis, government is not the solution to our problem; government is the problem." In other words, his view of government as the problem was particular to that time and circumstance, and not to be taken as an eternal truth.

When Reagan Sounds Like Al Gore
Much of the cowardice, political expedience, and pessimism that parades as tough-minded skepticism about climate change is rooted in Ronald's era, but two quotes in his 1981 inaugural address express a more positive, can-do approach to problem solving more associated with Democrats today.

Consider, as the Republican Party continues to run from the problem of climate change with a mix of denial and fatalism, Ronald's statement that

Or, at the end of his address,

"The crisis we are facing today does not require of us the kind of sacrifice that Martin Treptow (a soldier) and so many thousands of others were called upon to make. It does require, however, our best effort and our willingness to believe in ourselves and to believe in our capacity to perform great deeds, to believe that together with God's help we can and will resolve the problems which now confront us."

Though Ronald was not talking about climate change, he captured beautifully the spirit of taking on great causes for which, unlike war, no one need die.

The inauguration speech was preceded by several short speeches. Rev. Samuel Rodriguez said "the humble shall inherit the earth", which, given the setting, sounded far-fetched.

The freshly minted president's spiritual advisor, Paula White-Cain, said that the U.S. is a gift from God.

Senator Minority Leader Chuck Schumer said that Americans are a "forward-looking, problem-solving" people, a positive outlook that in the election lost out to nostalgia and resentment.

Schumer quoted at length from a letter written by Civil War soldier, Sullivan Ballou. What seems significant in the excerpt below is that the soldier risks his life not only for the country but also for the Government (underlined). Much of our nation's paralysis and polarization is due to the rigid depiction of our government as the enemy of the country, as if our heads were the enemy of our bodies. In addition, the lack of an adequate critique by Democrats of the government--a critique that would identify the government's shortcomings while clearly identifying the government's positive role in our lives--has contributed to the polarizing perception that Democrats want only more government, and Republicans only less. The Civil War soldier holds a much more integrated view of government and country:

"Our movement may be one of a few days duration and full of pleasure – and it may be one of severe conflict and death to me. Not my will, but thine 0 God, be done. If it is necessary that I should fall on the battlefield for my country, I am ready. I have no misgivings about, or lack of confidence in, the cause in which I am engaged, and my courage does not halt or falter. I know how strongly American Civilization now leans upon the triumph of the Government, and how great a debt we owe to those who went before us through the blood and suffering of the Revolution. And I am willing – perfectly willing – to lay down all my joys in this life, to help maintain this Government, and to pay that debt."

At least early on, Reagan was not reflexively anti-government: "Now, so there will be no misunderstanding, it's not my intention to do away with government. It is rather to make it work--work with us, not over us; to stand by our side, not ride on our back. Government can and must provide opportunity, not smother it; foster productivity, not stifle it." 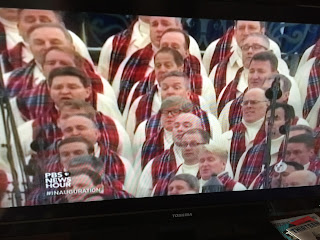 After Pence was sworn in as vice president, the Mormon Tabernacle Choir--a sea of white faces--sang about God shedding his grace on thee.

Then, Donald John Trump addressed the nation. Below, if you click on "Read more" are Donald's address and Ronald's address 36 years prior. In red are the negative sections. In brown, the veiled criticism. And in blue, Donald's particularly momentous statements.

Scanning the two addresses shows the contrast in negativity. Both are negative early in their addresses, but unlike Ronald, Donald cannot let go of the negativity and articulate a positive vision. Afterwards, Rev. Franklin Graham gave a positive spin to the rain that began to fall during Donald's address: "In the bible, rain is a sign of God's blessing."


God bless you, and thank you.
Posted by Stephen Hiltner