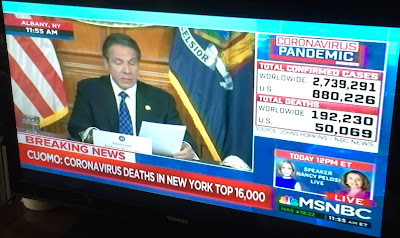 A picture is worth a thousand words. Though Andrew Cuomo has said a lot of things worth saying through the crisis, this television screen is speaking volumes. As of late April, the pandemic's daily count of infections and deaths had pushed the stock market indexes down into the bottom corner of the screen, where they're barely visible.

The stock market had long been the reigning champion of the screen,  producing a steady stream of new numbers of seeming portent for people to digest. Even when the news was about something else, the digits would parade across the bottom of the screen, rising, falling. Sports and weather also demand attention by generating massive amounts of numbers, but other important aspects of reality simply can't compete. Climate change? Sorry, it may determine the destiny of civilization and much of nature, but it's slow-moving numbers seem disconnected from what we experience day to day, and are either too big for us to fathom or too small to seem of import.
(click on "read more")
The pandemic on the other hand, offers numbers that reflect a steady shift in daily realities--infections, death--and each day brings fresh meaning as the numbers rise from hundreds to thousands to hundreds of thousands. This is a landscape we can understand, follow and even influence with our own actions as Governor Cuomo explains the significance of each day's new score.

When I was writing and performing climate change theater, I presented the economy and nature as characters in a classic narcissist/co-dependent matchup. The economy would extract whatever it needed from compliant, nurturing, undervalued nature, then tout its numbers, which were far more riveting than nature's boringly gradual buildup of carbon dioxide in the atmosphere. Unsurprisingly, the man in the play dumps nature for the far more seductive economy, with its ready cash and sexy numbers.

Key to the pandemic's success in displacing the economy and its powerful arsenal of constantly updating numbers is not only the number of people who are dying, but also the fact that the deaths are coming in a steady stream, with each new day providing a fresh tally. A natural disaster, or more accurately an unnatural disaster to which global warming plays a supporting role, does its damage within a few days, and therefore lacks the ongoing drama that a steady supply of numbers can deliver.

Other national traumas were also reported through a drumbeat of numbers. Daily reports on the Vietnam War, whose American death count the pandemic has now surpassed, ritualistically began with a daily tally of dead and wounded. A decade later, evening news anchor Walter Cronkite used a similar daily drumbeat of numbers to dramatize the Iran hostage crisis, announcing each evening the number of days that had passed since the Americans were taken hostage. The number of hostages remained the same, but the passage of time itself became the number factory. 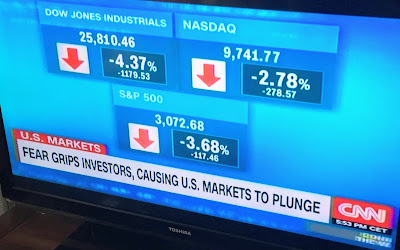 Now that the economy is beginning to reopen, the stock market is reasserting its numerically based power to dominate the screen, displacing the diminishing pandemic numbers with the riveting mania of the market's rises and falls.

In this picture, taken only seconds later, the numbers have already shifted, with each number being the sum of countless other numbers and mini-dramas as each stock constantly shifts in value.

One of the many impacts of the pandemic, then, was its months-long eclipsing of the greatest numerical news factory ever invented. The pandemic numbers have reflected our progress in collectively solving a shared problem. At some point, however, the stock market will once again rule unchallenged, with numbers that reflect not a collective effort to solve shared problems, but a pursuit of private gain.
Posted by Steve Hiltner