Scandalizing, Minimizing, and the False Objectivity of "Both Sides" Journalism

News headlines and opinion pieces flash for a moment on our consciousnesses like fireworks in the evening sky, each making its momentary splash before quickly being displaced by others in an endless stream of efforts to light the darkness. One of the more illuminating opinion pieces, and one whose insight is worth capturing in a bottle to light one's long walk home, is a piece by Nicole Hemmer called "Scandalize! Minimize! Repeat as Necessary." It offers a quick history of what it calls the "conservative media's scandalization project." Dating back to the 1940s and gaining momentum in the 1990s and 2000s, it describes the conservative "effort to create an air of nonstop scandal around previous Democratic presidents and presidential hopefuls."
(click on "read more") 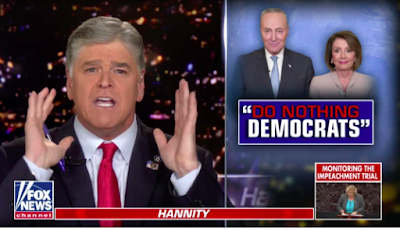 The scandalization of Democrats is combined with a minimization of Republican wrongdoing, most graphically in recent days by Fox News placing the impeachment of President Trump in a small box in the corner of the screen while Hannity tells his audience that none of it matters.

Now, one could point out that people and political parties are inherently apt to point out others' faults while minimizing their own, and it is this natural human inclination that causes many journalists to declare "both sides do it" and then go home thinking they have fulfilled their obligation to be objective.

But what if pathology seeks cover within the natural variability of political behavior, just as fundamental changes in climate remained disguised for decades within the normal variability of weather? If one political party is primarily responsible for an ongoing abuse of political norms, then the "both sides" meme shows not journalistic objectivity but an overt bias in favor of those who exhibit the worst behavior. As journalists seek safety within a false "all sides" pose, the mainstream media provide cover for a mounting threat to democracy. Periodic opeds like Henner's cannot compensate for the hardwired "both sides" orthodoxy that controls daily reporting.

A healthy political climate depends on conscience, regulation, judgement, truth, and a sense of decency and fair play to keep behavior within bounds. That political climate, like the earth's climate, is vulnerable to the cumulative effect of relentless abuses small and large. The normal background tendency to accuse or minimize has morphed into a steady stream of lies and fabrications intended to erode our capacity to recognize bad behavior and reward good.


"To write off Mr. Trump’s wrongdoing as run-of-the-mill politics, then, requires both minimizing what he has done and scandalizing what other politicians do. As an added bonus, the strategy damages Americans’ faith in government and public service, bolstering the Republican Party’s anti-government agenda. As such, it’s a powerful, effective political strategy — and a deeply nihilistic one."

Email ThisBlogThis!Share to TwitterShare to FacebookShare to Pinterest
Labels: both sides do it, conservative media, false objectivity, Nicole Henner