It's often said, usually after another poll comes out, that this is the first time in America that people believe the next generation will fare worse than the one before. This pessimism can be correlated with two increasing vulnerabilities of our nation: the tendency of misinformation to linger in people's minds, and the tendency of Americans to devalue foresight and ignore early warnings of approaching crises. Whether it was the wave of intelligence in the summer of 2011 pointing to an al Qaeda attack within the U.S., the misinformation leading up to the invasion of Iraq, the reckless behavior prior to the financial meltdown in 2007-8, or the long ignored warnings about accelerating destabilization of climate, problems are repeatedly allowed to grow into crises, then the local evening news programs revel in the stories of victims and heroes in the aftermath. We need to value people who are able to see beyond the present bubble of circumstance and distraction to what's coming. 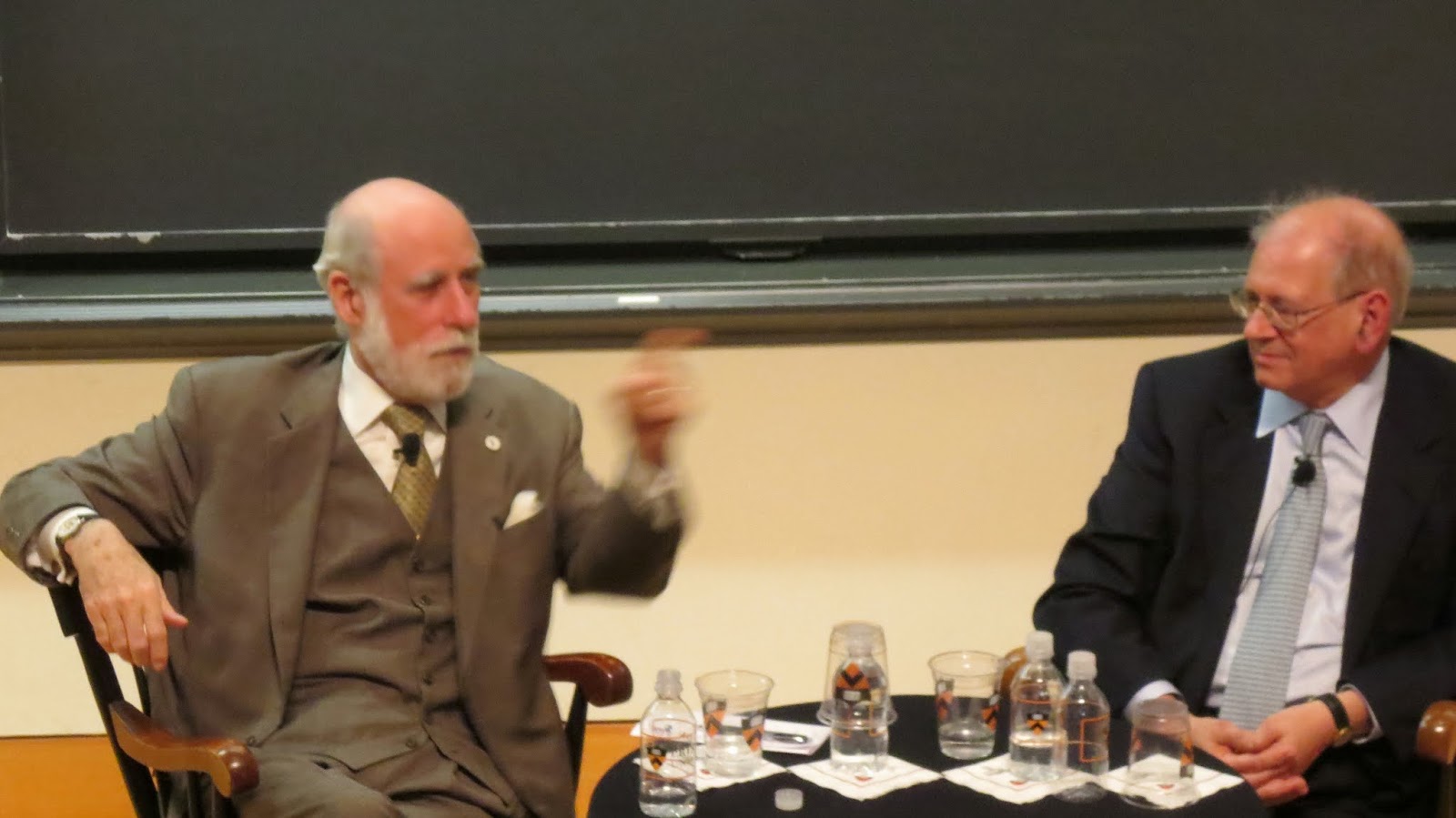 That was one motivation for attending a discussion at Princeton University by two founders of the internet, Vinton Cerf and Bob Kahn. This year marks the 25th anniversary of the World Wide Web, and the 40th year since Cerf and Kahn published their paper describing the protocols for connecting computer networks. Back in 1974, there was little interest in the concept of an internet. Computers were bulky and very expensive, filling whole rooms, and the universities that housed them saw little advantage in connecting one to another.

After a discussion that showed Cerf and Kahn to be engaging, with a mixture of passion and objectivity often evident in people in the scientific and engineering fields, they fielded questions from the audience. One question I was particularly thankful for was about Al Gore's role in the development of the internet. Not surprisingly, there was some laughter from the audience, but Cerf and Kahn were very clear in their response. Al Gore was misquoted by his attackers, and in fact played an instrumental role in developing the internet so central to the economy and our lives today.

Back in 2000, when Al Gore was facing politically motivated ridicule, Cerf and Kahn wrote the following in his defense:


"As far back as the 1970s Congressman Gore promoted the idea of high speed telecommunications as an engine for both economic growth and the improvement of our educational system. He was the first elected official to grasp the potential of computer communications to have a broader impact than just improving the conduct of science and scholarship."

In other words, the true story--of a forward thinker acting decisively to better the country's future--was overshadowed by the myth that Al Gore had selfishly claimed he "invented the internet". One reason the misquote gained momentum was that "invent" and "internet" start with the same sound, and therefore sound like they belong together. What Gore actually asserted is in the full text below.

Vin Cerf told an interesting story about the news media's response to the accusation. Both Cerf and Kahn got more than 100 calls from journalists that day pertaining to what Al Gore had allegedly claimed. Rather than ask if the quote was accurate, the reporters all asked the same question: "Are you angry." When CNN showed up with a camera crew at Cerf's office, he actually had a picture in his office of him and Al Gore shaking hands. They were good friends, but that story, of the friendship and Al Gore's contributions to making the modern internet possible, didn't make it into CNN's coverage that night.

In other words, the nation not only lacks an adequate mechanism for correcting misinformation in political discourse, but the news media actually participates in the perpetuation of misinformation.

Though Al Gore can have a heaviness that is off-putting, and did not respond adequately to the false accusations during the 2000 campaign, his roles in launching the internet and providing early warning about climate change would, in any country that cares about its future, be broadly known and highly valued. Instead, his legacy is overshadowed and obscured by fabricated quotes and controversy.

Below is the full text, taken from one of many websites where it can be found. Click on "read more".

Al Gore and the Internet

By Robert Kahn and Vinton Cerf

Al Gore was the first political leader to recognize the importance of the Internet and to promote and support its development. No one person or even small group of persons exclusively "invented" the Internet. It is the result of many years of ongoing collaboration among people in government and the university community. But as the two people who designed the basic architecture and the core protocols that make the Internet work, we would like to acknowledge VP Gore's contributions as a Congressman, Senator and as Vice President. No other elected official, to our knowledge, has made a greater contribution over a longer period of time.

Last year the Vice President made a straightforward statement on his role. He said: "During my service in the United States Congress I took the initiative in creating the Internet." We don't think, as some people have argued, that Gore intended to claim he "invented" the Internet. Moreover, there is no question in our minds that while serving as Senator, Gore's initiatives had a significant and beneficial effect on the still-evolving Internet. The fact of the matter is that Gore was talking about and promoting the Internet long before most people were listening. We feel it is timely to offer our perspective.

As far back as the 1970s Congressman Gore promoted the idea of high speed telecommunications as an engine for both economic growth and the improvement of our educational system. He was the first elected official to grasp the potential of computer communications to have a broader impact than just improving the conduct of science and scholarship. Though easily forgotten, now, at the time this was an unproven and controversial concept. Our work on the Internet started in 1973 and was based on even earlier work that took place in the mid-late 1960s. But the Internet, as we know it today, was not deployed until 1983. When the Internet was still in the early stages of its deployment, Congressman Gore provided intellectual leadership by helping create the vision of the potential benefits of high speed computing and communication. As an example, he sponsored hearings on how advanced technologies might be put to use in areas like coordinating the response of government agencies to natural disasters and other crises.

As a Senator in the 1980s Gore urged government agencies to consolidate what at the time were several dozen different and unconnected networks into an "Interagency Network." Working in a bi-partisan manner with officials in Ronald Reagan and George Bush's administrations, Gore secured the passage of the High Performance Computing and Communications Act in 1991. This "Gore Act" supported the National Research and Education Network (NREN) initiative that became one of the major vehicles for the spread of the Internet beyond the field of computer science.

As Vice President Gore promoted building the Internet both up and out, as well as releasing the Internet from the control of the government agencies that spawned it. He served as the major administration proponent for continued investment in advanced computing and networking and private sector initiatives such as Net Day. He was and is a strong proponent of extending access to the network to schools and libraries. Today, approximately 95% of our nation's schools are on the Internet. Gore provided much-needed political support for the speedy privatization of the Internet when the time arrived for it to become a commercially-driven operation.

There are many factors that have contributed to the Internet's rapid growth since the later 1980s, not the least of which has been political support for its privatization and continued support for research in advanced networking technology. No one in public life has been more intellectually engaged in helping to create the climate for a thriving Internet than the Vice President. Gore has been a clear champion of this effort, both in the councils of government and with the public at large.

The Vice President deserves credit for his early recognition of the value of high speed computing and communication and for his long-term and consistent articulation of the potential value of the Internet to American citizens and industry and, indeed, to the rest of the world.
Posted by Steve Hiltner